Welcome to Buzz Mugs! Enjoy FREE Shipping on orders over £20! 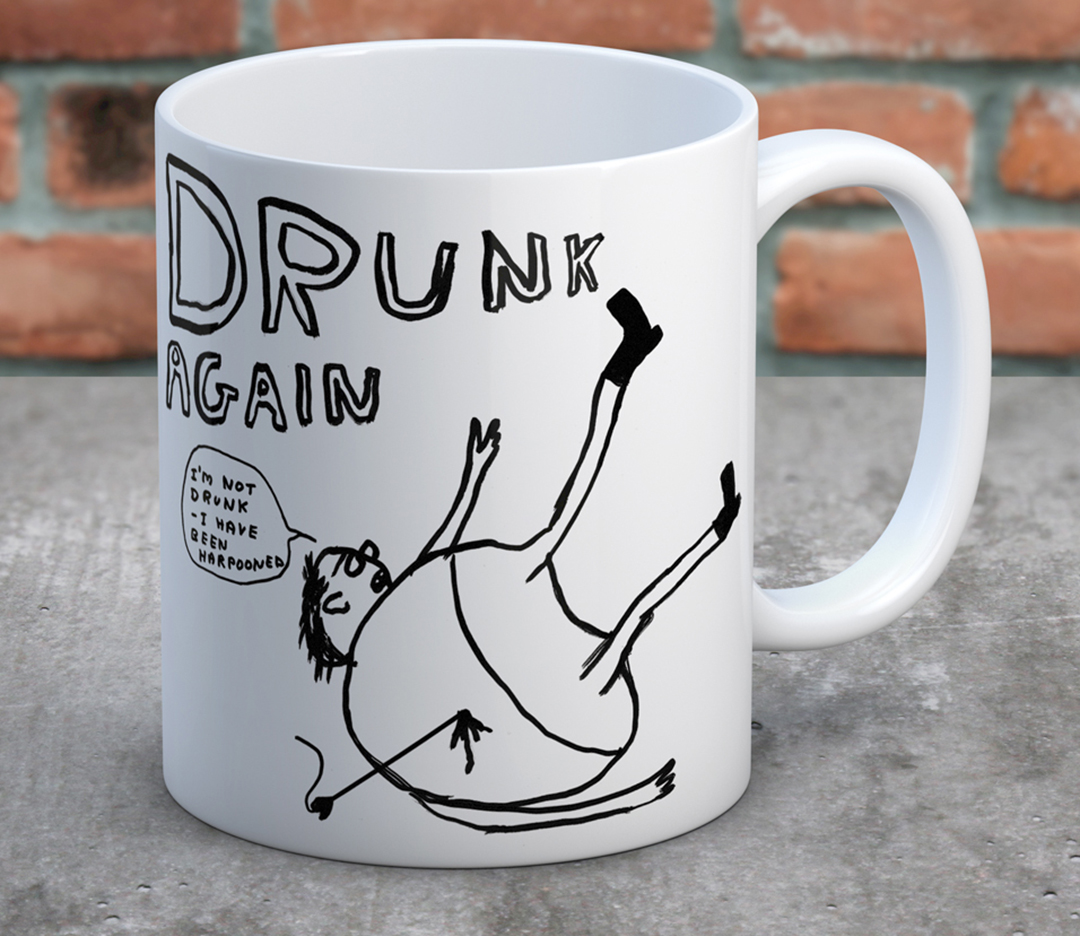 David Shrigley is the definition of the contemporary artist who's dealing with the eternal conflict between the reality of society and his internal genius. He escapes the limits of real life by communicating his thoughts and view on the world through the variety of art he creates.

With the cartoon-like sketches that Shrigley makes, he ensures they are intentionally dysfunctional to capture the doubts and fears expressed by humanity. He presents an anarchic voice spiced up with some nonsensical elements. In art, Shrigley includes some handwritten, unedited, and assigned texts that display the poignant nature of the work. He explores the cultural market by using his artistic skills to develop parodies whose logic is often questioned by the public. The work brings out Shrigley’s subtle personality that speaks volumes about the wit humour in the wit art he creates. This makes the narratives more appealing to the audience despite the crudeness of the sculptures. The writings and texts that Shrigley comes up with to describe his cartoonish drawings are perfect for decorating gift merchandise like funny mugs and coasters. You can also use them as artistic decors for your home, office, institution, or other places that can handle the humour that they feature. From illustrations, cartoons, drawings, sculptures to gigantic installations, or small household items such as sarcastic mugs and coasters, Shrigley brings his artistic persona to life. His dark genius often communicates through black humour and sarcasm.

Why We're So Excited to Sell His Art

For more than two decades, Shrigley has produced a never-ending stream of concepts and ideas, jokes and observations showcasing the reality of contemporary society. His works have been displayed in major art institutions and museums as well as published in some of the most famous newspapers, magazines, and books. His illustrations, drawing, sculptures, animations, short films and installations all make up a distinctive world. Distinctive features such crossing-out text, ink splurges, boneless arms and legs, knob heads or weird handwriting reflect his visual identity.

You'll find funny yet dark messages held by animals. Take, for example, the stuffed Jack Russell which is holding up a sign that says, "I'm dead." Because the dog can't talk, he uses a placard, which has the message written on it. However, Shrigley also uses tautology such as a hanging sign saying, "Hanging Sign." You must look at the relationship between the message and the medium not only between the message and the audience.

Other times, Shrigley uses cognitive dissonance in statements such as the ostrich, which doesn't have a head-on its very long neck, which may be stuck in the sand. Animations are also part of Shrigley's portfolio. A good example is the Conveyor Belt where the winner was the person who remembered the highest number of objects, which appeared on a belt.

While sculptures such as "Boots" highlight shoes, which are useless. They're misshaped, black and shiny and walk down the staircase in a sneaky way, showcasing different personalities. They're simple and funny, resembling the boots of a pirate when they come to life. On the other hand, it's how Shrigley's drawing would look like if they transformed into sculptures.

Shrigley uses all types of mediums, including ceramic funny mugs and coasters to portray his illustrations. You'll find a variety of sarcastic and funny messages such as "You Cannot Drink Too Much Tea" written above teacup illustrations on a mug to "I want to look like this," written next to a poodle on a mug.

What's more, you'll find that some of his sarcastic mugs have positive and optimistic messages such as "Everything Is Good" which showcases the message above thumbs up illustrations. Shrigley's not always so optimistic but the three large thumbed scenes bring a light of positivity to your next coffee or tea break. What's more, the contradicting "I've done nothing/I've done everything" mug is functional, funny and artistic. These funny mugs showcase the duality of the artist's spirit. 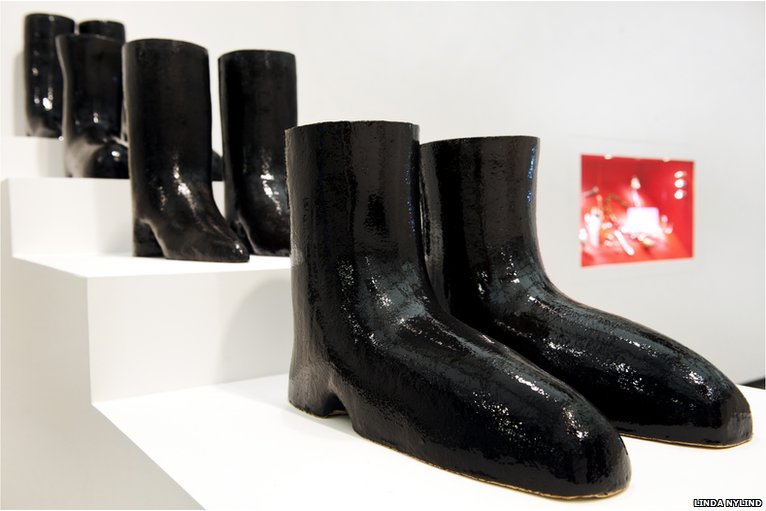 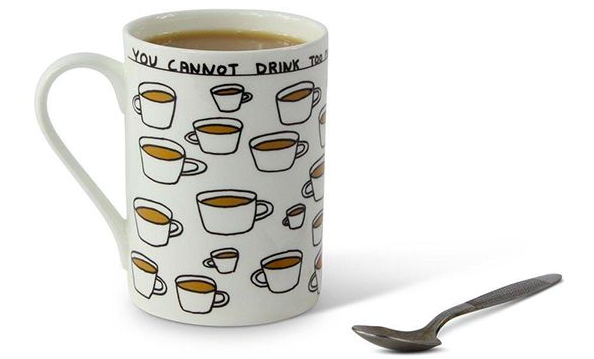 David Shrigley is a British contemporary artist, born in 1968 in Macclesfield, United Kingdom. In 1987, Shrigley studied Art and Design courses at the Leicester Polytechnic. He then took the environmental art course at the Glasgow Art School until 1991, when he received his Bachelor of Fine Arts. And before becoming an artist, Shrigley worked at the Centre for Contemporary Arts in Glasgow as a gallery guide.

He's famous for his unique illustrations and drawing style, which are satires of everyday circumstances and human relationships. The handwritten texts and sarcastic are usually passive in humour and highlight chance snippets of eavesdropped conversations. He tells stories from the perspective of a child and has the habits of a gossiper spreading rumors. Despite illustrations and drawings being the focus of his art, Shrigley also expands into other media outlets such as sculptures, animations, huge installations, music, and photography. And he captures a wider audience by collaborating with popular artist publications and with musicians.

With digital masterpieces such as The Artist of the Headless Drummer, Shrigley provides evidence of what he classifies as being storytelling's economy. With the simplest forms, he achieves a combination of light and dark. Using materials such as ceramic and bronze, Shrigley transforms objects he's found and plays with scaling them. He uses Lewis Caroll's stories for inspiration.

The "Lose Your Mind" exhibition, held in 2018 at the British Council in Shanghai. The exhibition originally launched at the Instituto-Cultural-Cabanas in Mexico in 2015. It travelled throughout Japan, New Zealand, and Korea.

In 2016, the Really Good exhibition was inaugurated in London at Trafalgar Square. The artist continued with shows at the Gallery at Sketch in London, as part of a strong movement of artist founded restaurants. In 2013, Shrigley was nominated for a Turner Prize, following his "Brain Activity" exhibition at the Hayward Gallery in London.

Aside from his artwork, Shrigley's also published a wide range of books such as "Weak Messages Create Bad Situations", "How Are You Feeling?", "Fully Coherent Plan for a New and Better Society", and "What the Hell Are You Doing?". Throughout his written work, Shrigley showcases serious social issues with the help of illustrations, sarcasm, and jokes. For example, in "How Are You Feeling", the author creates a guide using cartoons to illustrate the mental problems people have. Although it doesn't offer any real solutions to different psychological issues, it is a funny volume.

Another good example of Shrigley's dark humour is the "Weak Messages Create Bad Situations" manifesto which critiques itself prior to receiving any criticism from readers or professionals. It resembles the journal of a disturbed but mindful teenager with the surprise and concern elements included. 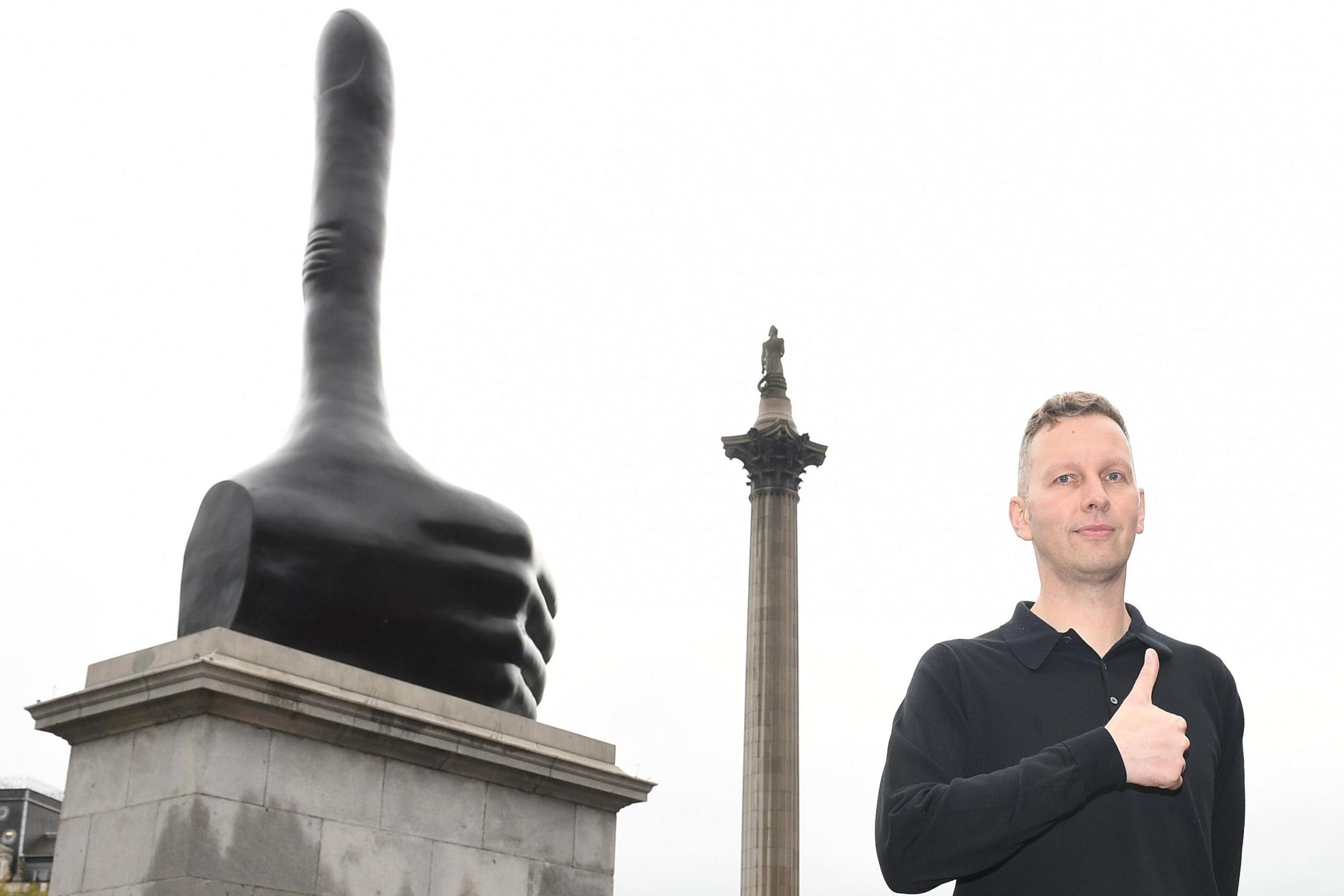 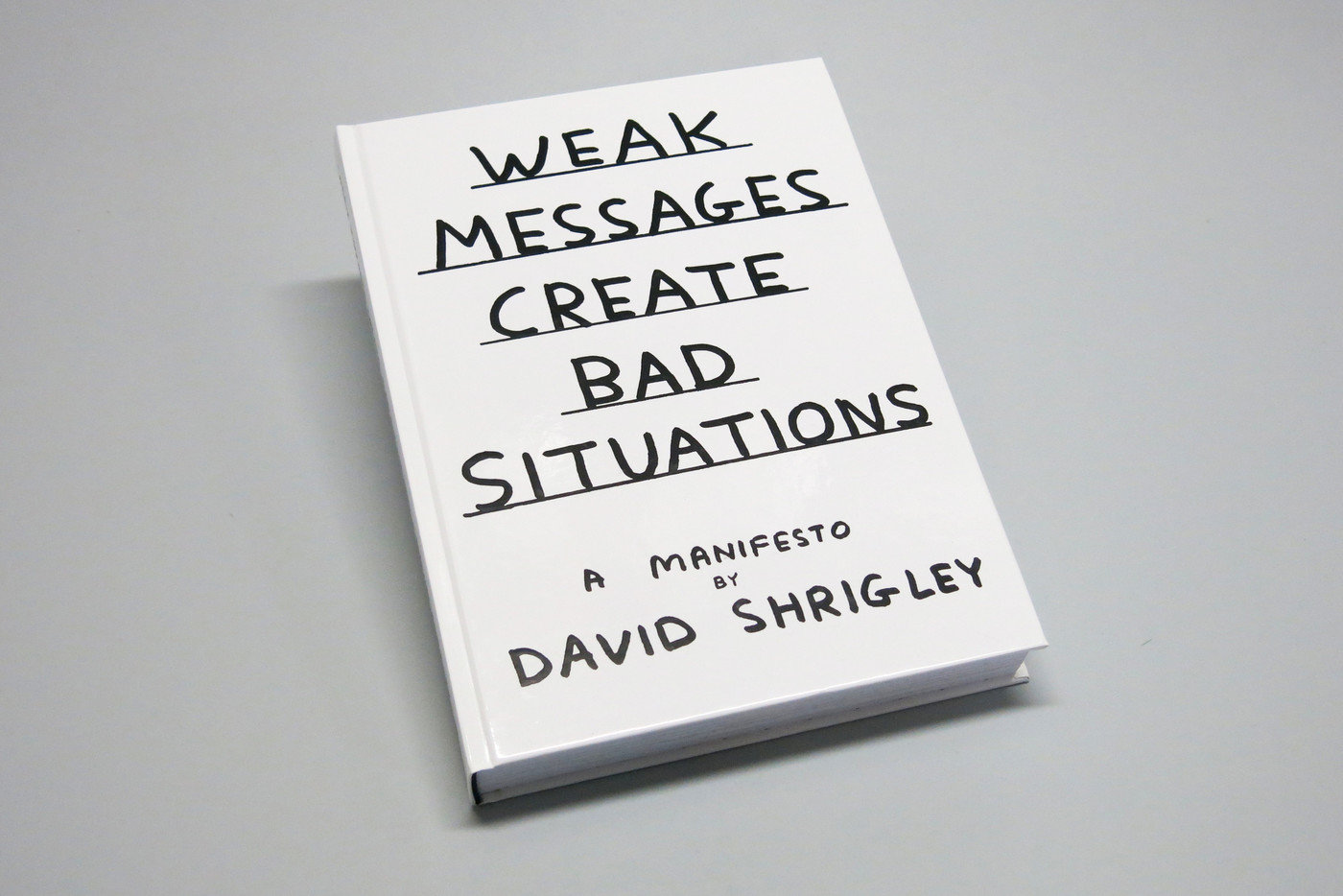 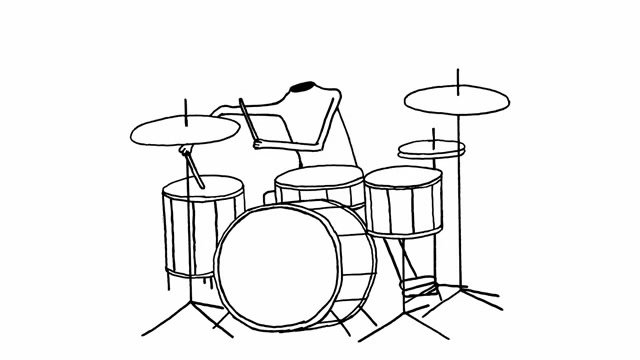 The Origin of Shrigley's Humour

David Shrigley is a wild card. His work absorbs gruesome intelligence, black humour, and undisputable wittiness. What's more, his sense of humour slashes through all his drawings, art collaborations, and sculptures. Although he comes from a religious background, as his father's a Christian fundamentalist, he's not too keen on religion. He sees it as an obstacle, which prevents you from enjoying the magic of life. But that doesn't make him an atheist either. Shrigley believes that doing bad things is a genetic predisposition in people and religion is used to justify such behaviour.

What's more, his religious upbringing meant he had to follow certain rules and social guidelines. For example, when he was a child, he wasn't allowed to read violent comic books. That's when he developed a certain obsession for death, violence, and chaos. He used to imagine building torture chambers and execution places for different super-hero figurines and would make them out of carboard boxes. It's a behaviour he sees as normal in little boys.

Also, when he was young, Shrigley was the only one in his class who could draw perfect dinosaurs. Even at the tender age of 4, he would draw illustrations with speech bubbles. Somehow, he continued to do this all his life. However, he was always given a tough time by professors and academics because of his unique vision about art. He believes art should be fun and a bit silly. That's why, despite he had no interest in comic book or cartoons, he became a cartoonist, at one point.

The raw form of his illustrations and drawings made him famous. He doesn't mind his drawings being awkward, it's what makes them authentic. Sometimes, Shrigley considers his work a bit too dark. It's when he pulls back and relies on intuition. In fact, he's stated that he's in no control of his content. The discrepancy between his discipline as a professional artist and the chaos of his drawings shows he's not interested in making beautiful and aesthetically attractive drawings.

His mistakes are real and unintended. It's a form of a split personality. Although creates the work of a sociopathic amateur artist, he relies on professional balance and discipline. In fact, his signature feature is the contrast between the outsider art pieces and his art-world insider reality. For example, his friends are highly appreciated and Turner prize-winning artists such as Martin Boyce and Richard Wright. Because he can't break the rules of society in real life, Shrigley uses his artistic voice to express his beliefs and messages.

While his dark, yet intelligent drawings focus on society's absurdities, Shrigley's also tested the waters of filmmaking. His first film featured goats at play, on the Hydra Island in Greece. It was part of the "Slaughterhouse" project run by DESTE Foundation. The film's 14 minutes long and highlights important historical events on the site. Nobody had cared it was being used as a slaughterhouse once, which had a metal beam with rusty hooks. Since the movie, Shrigley has become a vegetarian, which has added a certain twist to the machinery he has built. It's horrifying but also quite funny.

Why not send someone you love a little piece of contemporary art in the shape of a coffee mug.

Many find Shrigley work enticing and relatable so they make thoughtful and interesting gifts for loved ones or for yourself.
SHOP NOW